A new developerWorks global survey of 2,000 IT professionals indicates cloud computing and mobile application development are hot topics today, and are expected to emerge as the most in-demand platforms for software development over the next five years.

Although we don’t know exactly who the respondents are, the majority of developerworks readership are engaged in development of one sort or another and so the survey is a clear indication of how much developer mind-share is supportive of cloud computing in general—-irrespective of particular platforms and technologies.

Nine out of 10 respondents to the survey, which reached more than 2,000 IT professionals worldwide, anticipate cloud computing overtaking on-premise computing by 2015 as the primary way organizations acquire IT.

With this level of enthusiastic support, developers are way ahead of their colleagues in Network Administration, Security and the CIO’s office. Of course this is nothing new: IT management have traditionally been initially against many of computing’s major paradigm shifts: minicomputers, PCs and PC networks and mobile devices, and it has often been up to business users or their departmental development staff (often external consultants or ‘power’ business users) armed with corporate credit-cards to pave the way for each successive revolution.

The big disruptions caused by Minicomputers in the 70’s and IBM PCs in the 80’s are now over 25 years in the past, so we are well overdue for a disruptive new development and deployment paradigm.

So far the deployment of Saas products such as Salesforce.com have acted as the initial Trojan Horse in bringing in Cloud and proving its business and cost benefits. The rest of the story still has a long way to play out.

Forrester survey from Q3 2010 shows cloud adoption will pick up significantly in 2011, particularly among large large enterprises and high-tech companies. 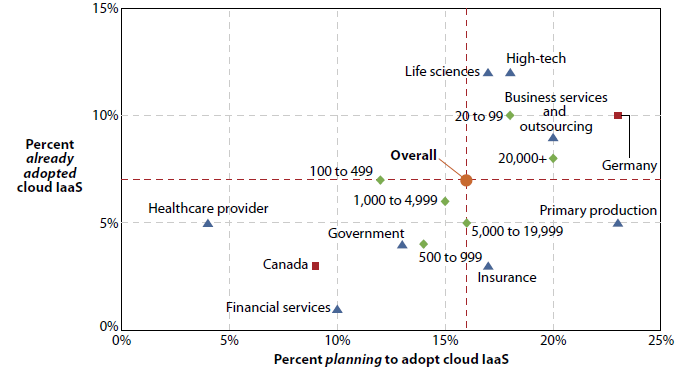 According to Mark McDonald, group vice president and head of research for Gartner Executive Programs

CIOs and IT have been boxed in between modest budget growth and growing legacy requirements. New lighter-weight technologies – such as cloud computing, software as a service (SaaS), and social networks -and IT models enable the CIO to redefine IT, giving it a greater focus on growth and strategic impact. These are two things that are missing from many organizations.

Also surprising is the expected rate of adoption

CIOs expect to adopt new cloud services much faster than originally expected. Currently, 3 percent of CIOs have the majority of IT running in the cloud or on SaaS technologies, but over the next four years CIOs expect this number to increase to 43 percent.

Gartner’s survey also shows that CIO’s are acutely feeling the pressure to fix the perception that IT is simply an enabler rather than a key driver of business growth and a vital constituent to an organization’s future.

In other words Nicholas Carr’s 2003 HBS article IT Doesn’t Matter has proved to be at least partially true despite all the opposing bluster. Much of that bluster came from the vendor community which is hardly surprising: the thought of a meme like that catching on was beyond the pale for the likes of Microsoft, Oracle and HP, although IBM was tellingly silent on the matter. Many of these same vendors are now facing classic “innovator’s dilemma” issues with cloud computing. That is, they are trying to jump on the bandwagon without cannibalizing too much of their existing business — and doing it before it’s too late.

Cloud computing has potential to help CIOs in the areas of value (resulting from the economy of scale of multi-tenant cloud services and the reduction in on-premise equipment) and agility (no in-house installation or implementation required) but it may also reduce the differentiation that organizations can achieve through IT, especially when deploying Saas products that are also available to their competitors.